This year Jukola has attracted almost 20 000 runners among them a team from Luxembourg. After finishing on 1190th position in 2015, year we finished 599th last year and gained a starting position closer to the starting line here in Kangasala, so needed given the arrangement of the start corridor this year. We plan to run in the following order:

Those not travelling can follow the endeavours of the team through the organiser's websites: https://live.jukola.com/ for live feed and http://online.jukola.com/tulokset/en/ for online results

In addition, the public broadcaster YLE is sending live from the competition in  Finnish https://areena.yle.fi/tv and Swedish https://arenan.yle.fi/tv. These are restricted to a Finnish IP-adress, so this is for the as well IT-savy as polyglot!

And few quotes about the terrain by the course setter:

There are very few marshes or ditches.

The area is woodland with barely any man-made paths. The paths will be created during the competition by the feet of the previous runners.

One should ignore small-scale deviations (in this case meaning stones and smaller boulders) and concentrate on larger and more obvious landforms.

The map this year...

The connaisseurs say that the mapmaker has the habit to make very generalized maps and the snippets show they're right. We trained in a terrain where the map was not dissimilar from the above and a generalization will make the map readable. 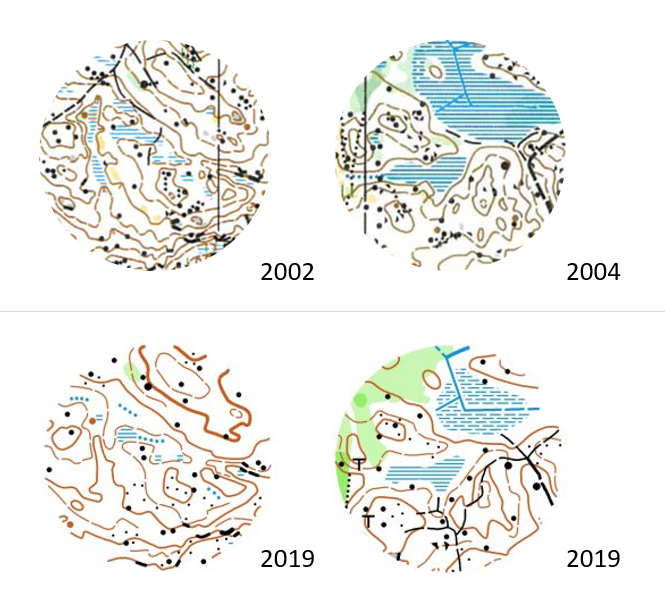 Honza, which one is ours? 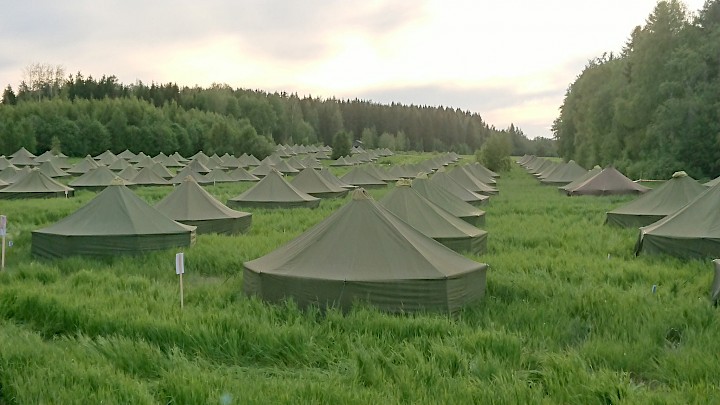 The weather is announced to become fair when Olena starts her Venla leg wearing OK Orion's colours. Jevgenijs will have the sun setting in his back.

And meanwhile in Karis 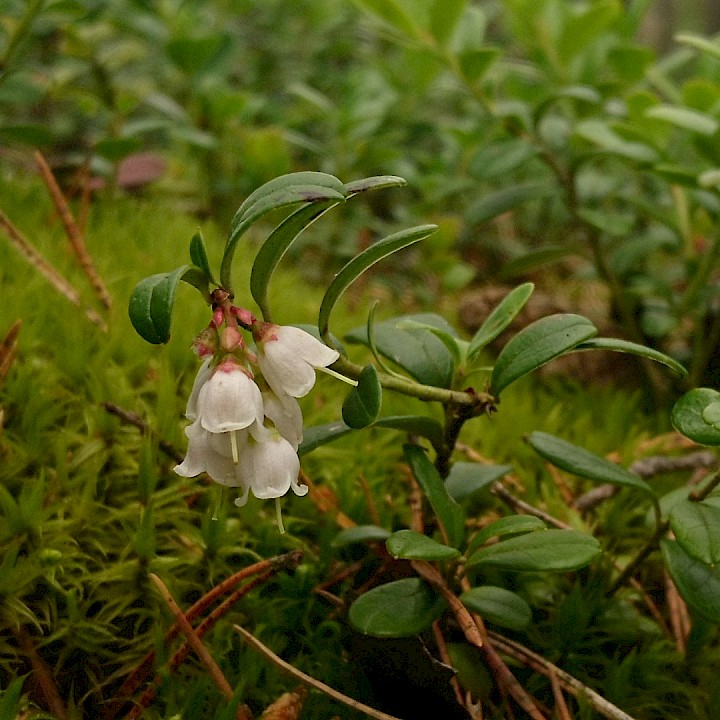 The "balisage" started 75 kilometers from the event center. 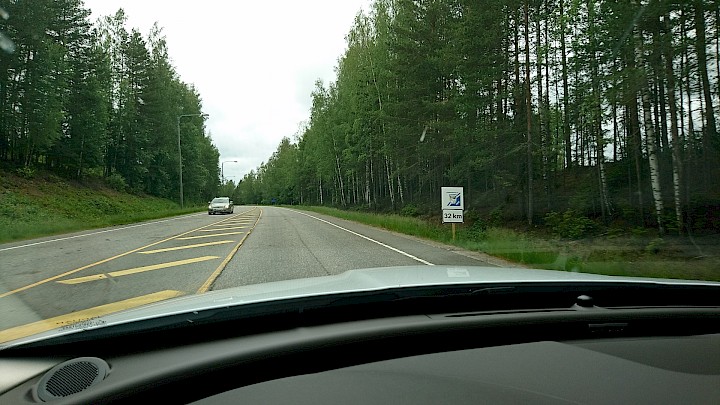 The starting block is quite unusual this year: the runners will be aligned in rows by 10, in blocks by 100, on a road. The pack of first leggers will be 450 meters long! Jonas on Jevgenijs' position 599, some 10 hours before the sharp start. 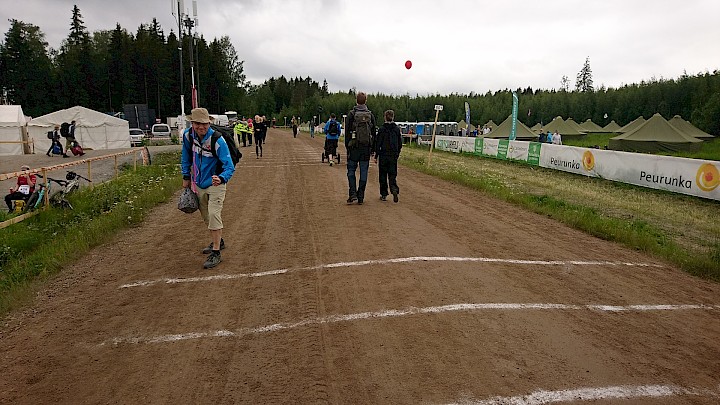 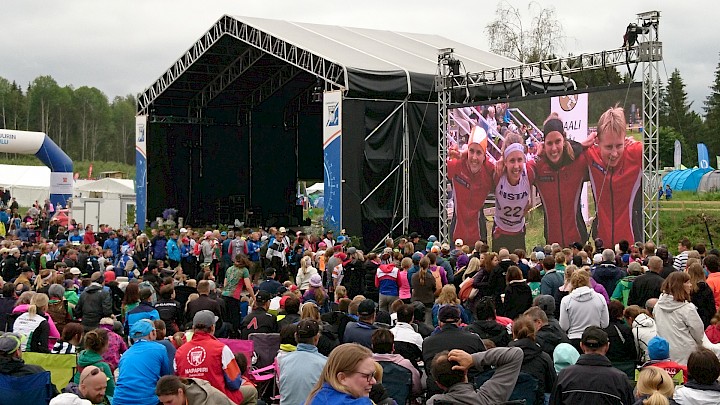 Our team is complete, Sasha and Olena went to get some sleep. The organizers are praising small countries that aligned their teams. Jevgenijs is gone to the warm-up area from which there is no way back. 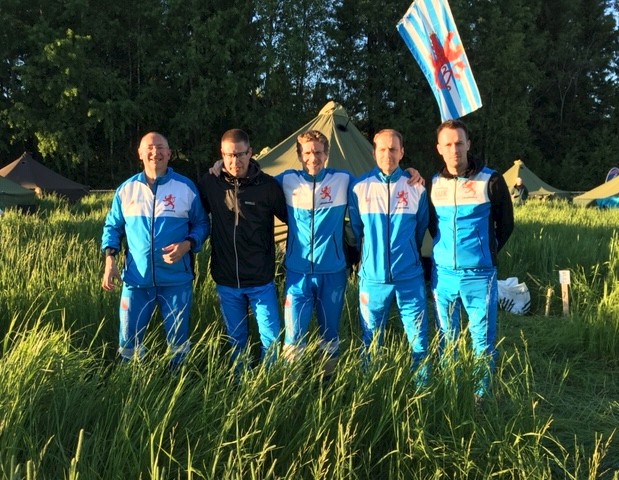 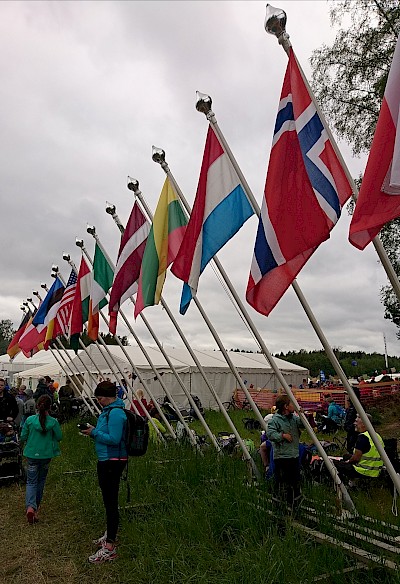 The relay is started. But please, don't think of start as an instant, rather as a moment with a certain duration - it takes two and half minutes before the back works it through to the starting line!

Can you spot Jevgenijs?!

It's quarter to five, Sun rose an hour ago, Jevgenijs and Jonas delivered, Ondra is muddy and bloody, David is out and Honza impatient, the Sild brothers fly and after nearly six hours of race Andreas Kyburz running for IL Tyrving is in the lead with mere 5 seconds ahead of the second. 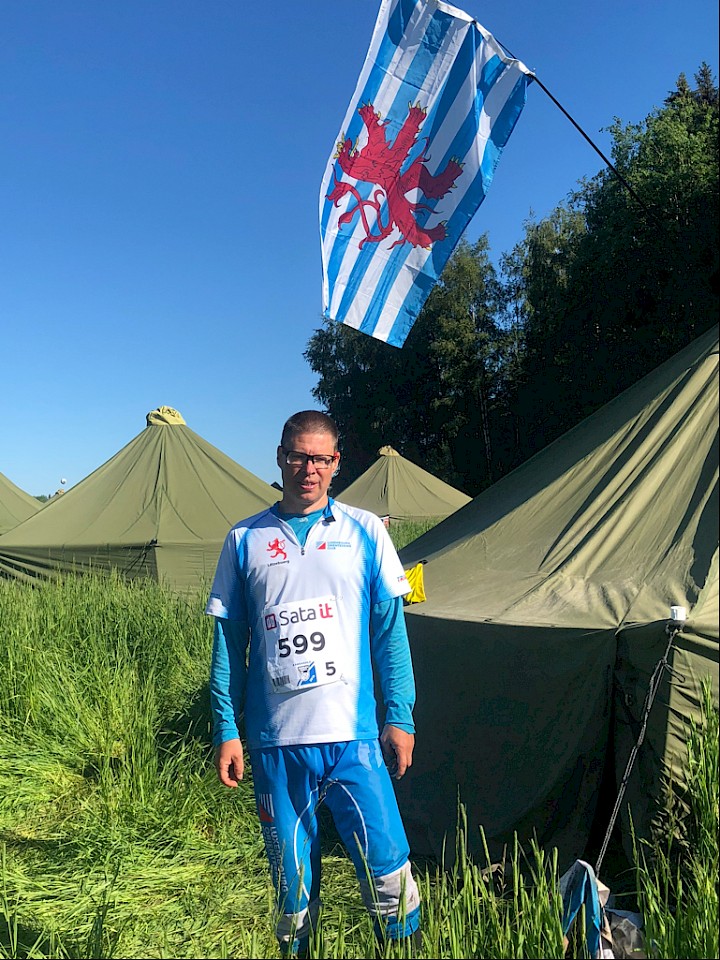 And came back happy after stripping some 57 places!

Olena and Sasha run an excellent race both. Olena, get well soon ! 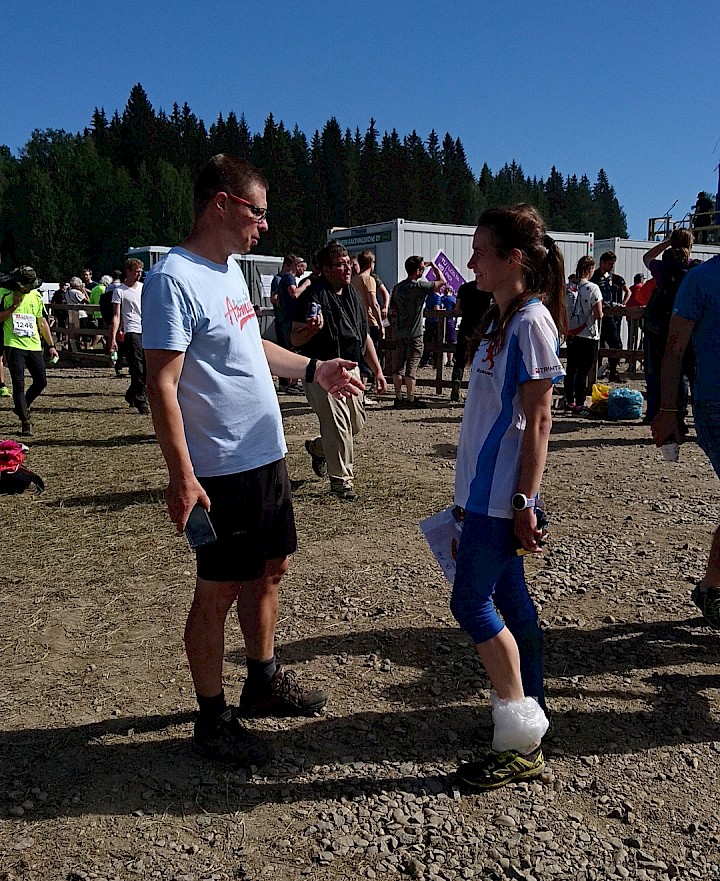 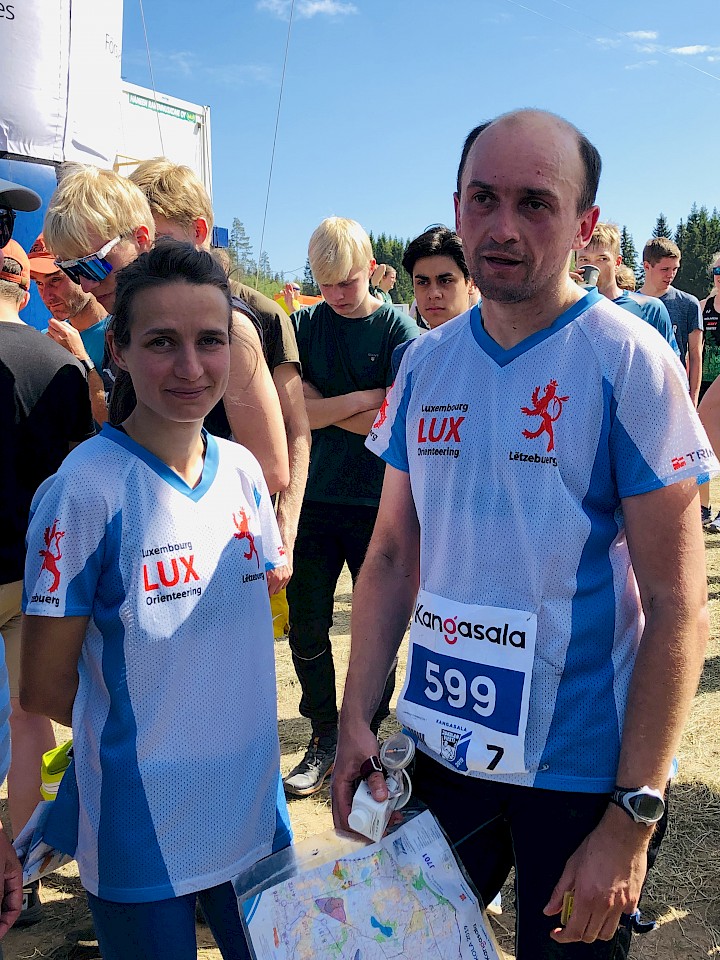 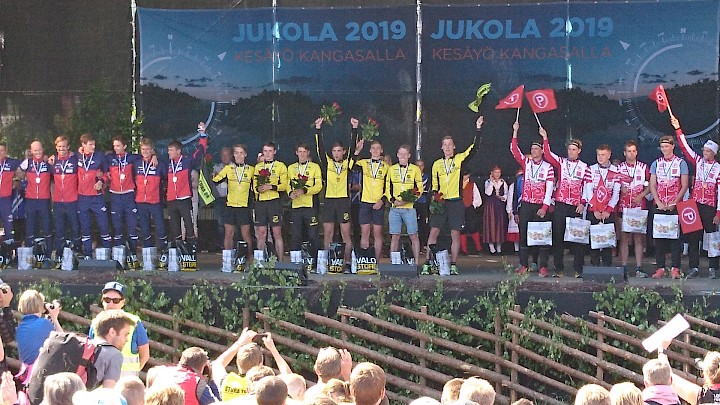 but finished 24 places better than last year despite the physically  very demanding terrain full of bull-head sized rocks and branches on the ground that only nordic runners fly across without noticing. 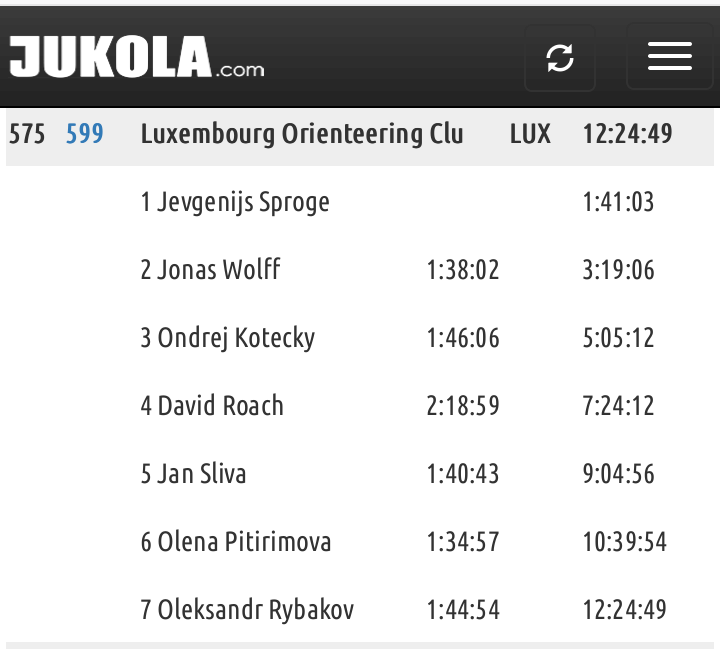 And the GPS tracking if top teams is available here. 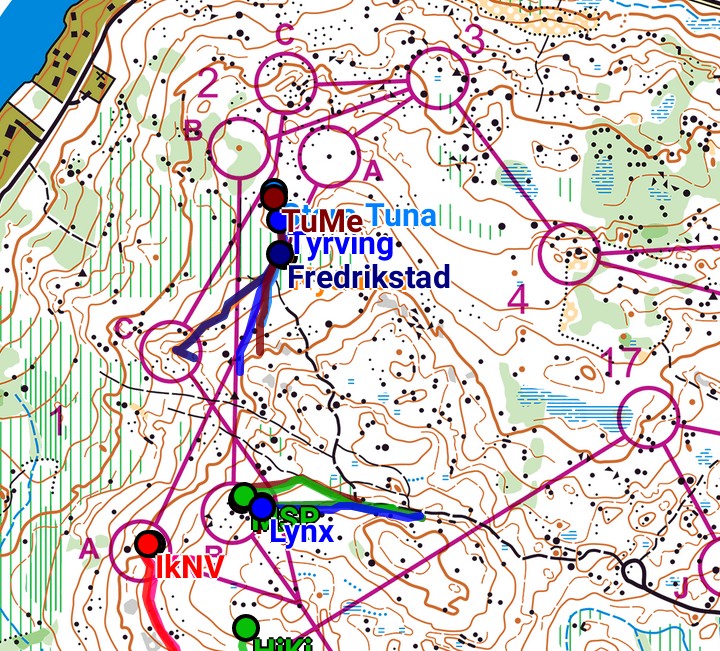 See you next week in Vielsalm!